A Shirt for Deuce 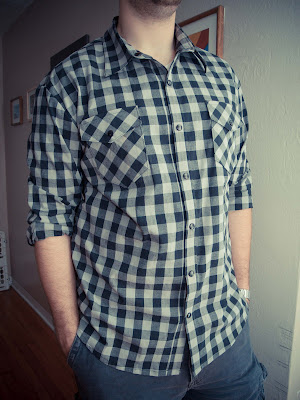 Hello again. So apparently I am becoming a slightly less selfish seamstress (not that there is anything wrong with that ).  I wanted to make a shirt for my dear boyfriend, Deuce. This is my first attempt at McCalls 6044. 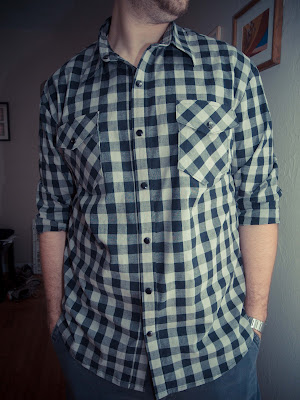 I used black color snaps for the closures and I'm really pleased with their look. We did have a slight accident with application, however, when Deuce wanted to help. A broken snap tool and holey Ikea cutting table later...He is now only allowed in the sewing room for observational purposes (he got a little too enthusiastic with the rubber mallet). 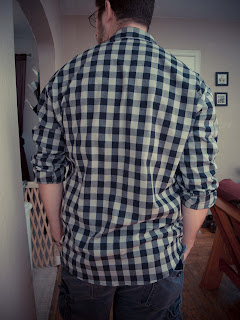 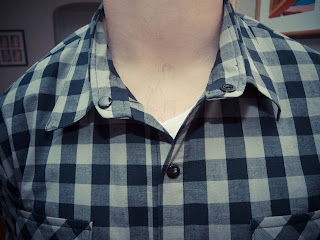 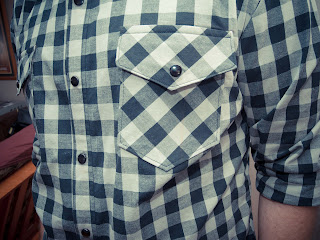 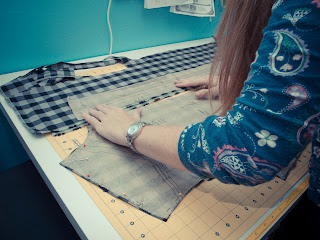 I did, however, attempt to match up the plaid at the center front. As you can see, to little avail. On a ridiculous note- the inside of the shirt matches perfectly. I guess I got my right and wrong sides mixed up. That's the problem with yarn dyed, I guess. On the bright side the horizontal lines in front match pretty well so at least it's as good as ready to wear. 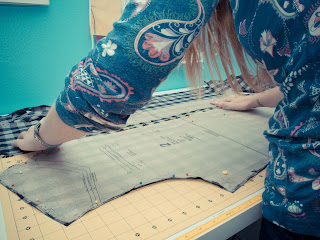 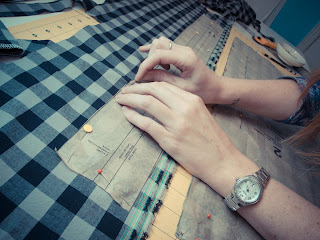 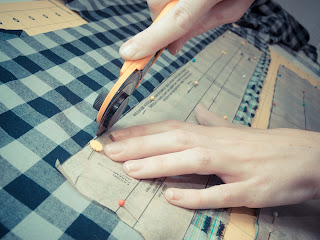 Men's wear was not as fiddly as I had expected it to be, what with the collar stand and and cuffs and all. Admittedly this pattern did not require a sleeve placket, only a narrow hem at the end of the back sleeve seam, so I guess I'll talk about fiddly after I have tackled one of those.

Well, there's another for the "to done" list. So many projects, so little time. On to the next!
Posted by WendyBird1015 at 8:04 AM No comments: 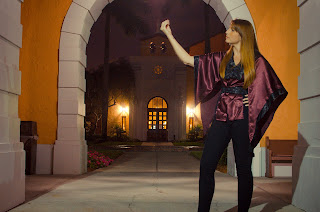 Hello, All!
Finally, I have the pictures to prove that I have completed my 1912 Ladies' Evening Wrap. In order to make this blog post more effective, I have decided to use Pattern Review's pattern review rubric. 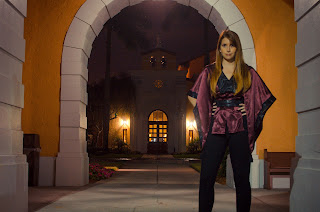 Pattern Description:
Evening Wrap/Jacket sort of thing.
Pattern Sizing:
Used the standard size and it fit perfectly. (I am normally and 8-10 in the big 4 and a 34-36 in Burda's digital downloads) 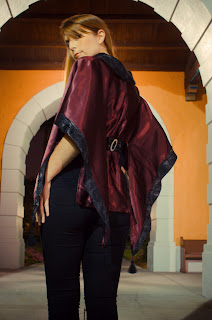 Did it look like the photo/drawing on the pattern envelope once you were done sewing with it?
Absolutely, though my "tails" were a bit wonky I think.
Were the instructions easy to follow?
The instructions that were there were easy to follow. However, a lot of the finishing I had to sort of figure out myself. For example: Turning under all those hems that weren't bound. I ended up using seam binding as a mini facing to turn the angles and hemmed out to either side. Also, Finishing the collar on the inside was tricky as well. Had to use seam binding on the inside raw edge and hand stitched it to the collar seam allowance. Would have been nice if there had been a facing to close up all those fiddly corners around the collar/lapel. Putting the tassels on was a sort of shot in the dark as well, had to figure that out on my own and I don't really like the finishing there either.

What did you particularly like or dislike about the pattern?
Only the piece itself (would have rather gotten a skirt or blouse, something that I could actually incorporate into my wardrobe- don't really see myself having an opportunity to wear this out) 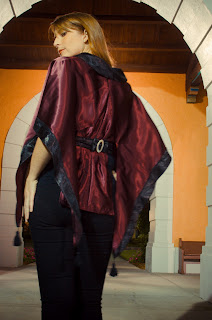 Fabric Used:
Poly crepe back satin in a Burgundy and Poly Asian print brocade in black for the binding, collar, and belt.
Also used black tassels from the home dec section in JoAnn's and a shell buckle I inherited from my Great Aunt Ruth. 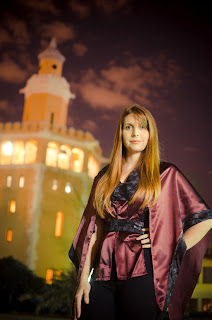 Pattern alterations or any design changes you made:
None. 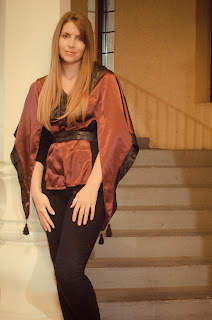 Conclusion:
Interesting piece, but the finishing could use some work.
Photo credit: Deuce Bradshaw Photography
Posted by WendyBird1015 at 7:37 AM 2 comments:

What I'm Working On

So I signed up to participate in the 1912 project over at the Vintage Pattern Lending Library. I just got my pattern via PDF, taped it up and cut it out. Its the Ladies' Wrap pattern. 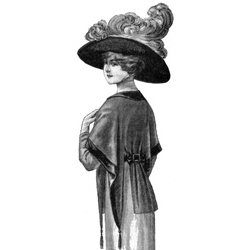 I bought my fabric at JoAnn's: I'll be using a wine crepe back satin for the main fabric and a black brocade for the trim and belt. I also found the perfect size shell buckle from the stash that I inherited from my Great Aunt Ruth. I'm excited to see how it comes together.

Also, on deck:
-BurdaStyle Handbook: Their Blouse in a polished Italian cotton floral that I got at the Sewing Expo in Lakeland.
-BurdaStyle Handbook: Motorcycle Jacket in the remaining green hounds tooth wool (from my cape) and purple anti-static lining.
-Starlet Suit: bright red poly shantung and black anti-static lining. (Cannot wait to get started on my Craftsy videos!!)

I will be posting more photos soon to show my progress on the Ladies' Wrap!
Posted by WendyBird1015 at 9:29 AM No comments:

So, for this post, I wanted to show you guys the wool cape project from start to finish. I have yet to get a really good picture of my wearing it so I'll save that for next time. But until then, here it is! 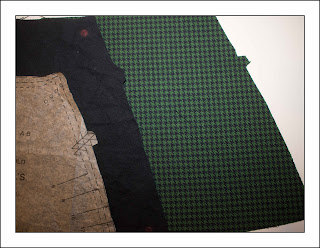 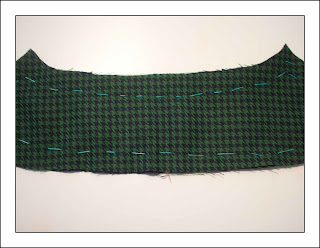 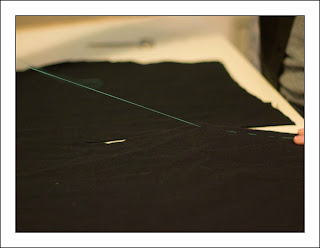 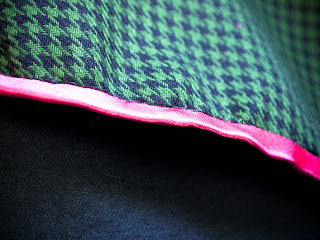 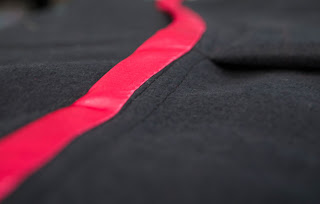 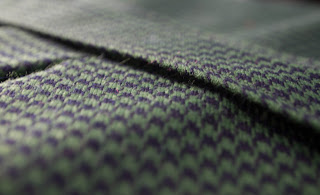 Watch for a picture of me wearing the finished cape next time. I am going to try to be more diligent about documenting my work. The most recent completed project: a skirt suit with matching blouse, will be up soon as well. There are no work in progress pictures for that one but I do have a few of the finished product, so I will share those. Let me know if you have any questions about the techniques I mentioned and I will do my best to fill you in!
Posted by WendyBird1015 at 8:42 AM No comments:

A Bit About My Sewing Habit

I was inspired today by the introduction posts on The Sew Weekly (for example: http://www.sewweekly.com/2012/01/the-lost-in-the-woods-dress/) this week. These are some of the questions their contributors answered which also apply to a non-contributor (one day aspiring contributor) like me.

How long have you been sewing: I started sewing in January of 2010 after getting my first sewing machine for Christmas. My mom had done some sewing when I was growing up but it didn't catch on for me until my first year of law school. I guess I was looking for a hobby but what I found was a passion.


What do you love most about sewing:
In all honesty, there is NOTHING like the feeling I get when I see the disbelief on people's faces when I tell them that I made the clothes I'm wearing. Also, the act of sewing itself is so zen. I love just losing myself in the step by step. Time just stops for me and I can lose an entire day without even noticing when I'm working on a project.

What do you hate most about sewing garments:
I think what I like the least is the silly prep work that's so important but also sometimes feels like its only there to get between you and your sewing machine. For example, ironing fabric after you've pre-washed it. So obnoxious. Also cutting and marking is somewhat tedious, though I suspect the only reason I don't like this more is that I haven't mastered a way to do this efficiently.

What do you want to accomplish this year:
This year I want to start and finish the wool suit pants that go with the 40s pattern reprint that I started just before new years. I would also like them to fit so I might make a muslin as well. I've never attempted pants before so we'll see. Also, I just recently signed up to be a pattern tester for the 1912 project and I would really like to stick to that commitment.

What are your favorite sewing/fashion blogs: There are quite a few as you can see to the right. That being said, my hands down favorite: Gertie's New Blog For Better Sewing (she is my idol. The Sew Weekly is up at the tippy top too.

Anyway, thanks for reading. I'd also love to hear from you. What is it that gets you excited about sewing and crafting? 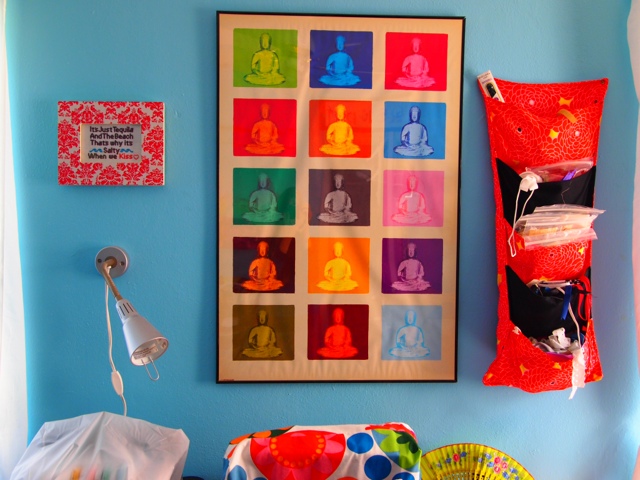 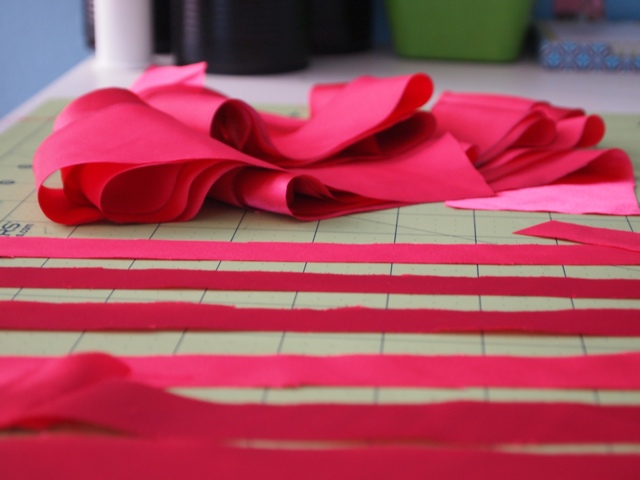 Welcome to my inaugural posting!

I thought a good way to introduce myself, first and foremost, would be to show you my sewing space. I read a lot of sewing blogs on a daily basis. I often imagine what their sewing spaces look like as they describe their work and process. This way, from here on out, you won't have to imagine! 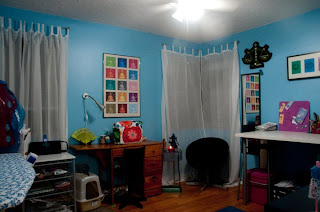 First Up: This is the view from the door. I have since removed the kitty litter box as I've been told it causes dust build up in machines. I have also since added a Serger to my sewing room: the much pined after Brother-1034D. 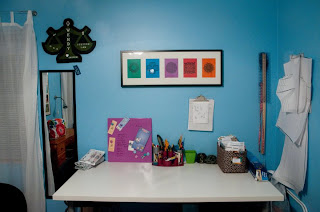 This is the cutting table. It is an Ikea vika tabletop with extending metal legs. It's nothing fancy, but it does get the job done. 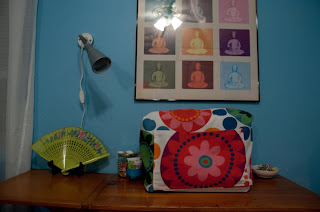 Here is a close up of my sewing desk. I inherited it from my late great Aunt Ruth. You would not believe the goodies I found in here after my grandmother gave it to me. Vintage shell buttons, bias tape, ribbon, zippers...etc. I have used a lot of what I found already, but I still have plenty more to use with future vintage patterns.

The sewing machine cover you see here was actually my first solo sewing project. The pattern came from the book One Yard Wonders which can be found here. That book was (and still is, actually) amazing! I essentially taught myself to sew with the various projects available. The great part was that there was no guesswork on how much fabric you would need. I found that figuring out how much fabric to get for a project was one of the trickiest sewing issues, as I NEVER remembered to bring the tutorial/pattern with me to the fabric store. When doing these projects, I always knew I only needed a yard. In fact, I could stock up when there was a sale as well. 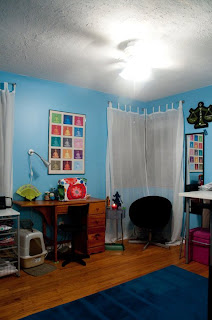 So I hope this gives you a setting to pull from when I do eventually post my WIP's. Thanks for joining me for my very first blog post!
Posted by WendyBird1015 at 3:42 PM No comments:

WendyBird1015
Hi! My name is Wendy. I am a home sewing fanatic. I began the descent into this obsession in December of 2009. The fact that I am also a law student keeps me from burying myself too deep in fabric and pattern stashes, but my love of the art of sewing has not been diminished (despite all of the distractions). This blog is dedicated to that love and to all the future projects that I aspire to begin and complete.